The Future of Communications

The first episode of PR Masterclass was organized on Wednesday, 10th November, where veteran communications leader, Nitin Thakur spoke about the Future of Communications. The Masterclass series is presented by Media Mantra and is powered by Reputation Today & Comms News.

What put Future of Communications on top of his mind was the recent ad campaign by Cadbury, said Nitin Thakur, Head of Communications – OYO during the first session of PR Masterclass powered by Media Mantra in partnership with Reputation Today.

Earlier in October 2021, Cadbury created a hyper-personalized ad featuring Shahrukh Khan, using their generative AI technology. Now, for those who didn’t notice the science behind the campaign Cadbury used technology by a company called Rephrase.ai – a company headquartered in Bangalore that used artificial intelligence and machine learning to create multiple videos of Shahrukh to promote local stores. While these videos looked original and life-like, they were created using an AI technique Generative Adversarial Network.

The innovation behind it definitely must have left all of us wondering. For communicators like us, the question is – Why can communication function not utilize such technologies to do life like hyper customized video communication campaigns? The other recent development that we have seen, says Nitin, is that the social media that has been actively used to drive the messaging is envisaging Augmented Reality and a parallel virtual future world which a lot of people are calling Metaverse. Clearly, a lot of action and excitement is going to happen, and therefore it is incumbent on us as communicators to actually try and think how communication will play out in the future.

While he doesn’t think of himself as a futurist, Nitin says his focus also on a day-to-day basis is on the current challenges like planning communication, budgeting for the communications function, fighting it out with the procurement teams,  planning stories, measuring social media sentiment – the whole gamut that forms a communicators life. But he does force himself occasionally to read up and imagine the future of communications. The challenge, he says, is that most of the material available is about predictions for the next couple of years or at best for the next four or five years.

The age of humanoids

Sharing a synthesis based on his reading, Nitin goes on to discuss the next two decades for communicators. The first question that might pose in anyone’s head when we talk about two decades later – Will humans still be ruling the earth, or will robots have taken over the world? To reach the future of communications, we need to first anticipate and layout three aspects – first, how human evolution will take place, second how societal evolution will take place and then consequently, the third, how media and communication evolution will play out as a result. Yuval Noah Harari’s – Homo Deus: A Brief History of Tomorrow, envisions a future where humans will become a mix of the material that they already are – which is carbon and additional material – silicon. . So, it is highly unlikely that robots are going to take over.  Instead, we might have, what Nitin calls, humanoids.

Humans will not lose their individuality; instead, it will be a combination of wearable and embedded implants that will make most of the mechanical, repetitive, physical, and mental activities automated in these humanoids of the future. Humankind does think that they are God’s gift to the universe and would like to retain their humanity and not become a robot. A lot of this development will also be curbed by regulation.  Bulk this actual hybridization of the human race will be for cosmetic benefits because humans are driven by vanity and emotions. So, for instance, some of the improvements in these humanoids could be more stamina, more endurance, a twenty by one eyesight. On the mental side, perhaps the capability to do calculations automatically at the speed of a computer, or memory enhancements, the capability of faster analysis, etc. If you look back at human history, the advancements by humans have been for convenience. If this is how one anticipates the human race will evolve, let’s understand how communication will evolve.

Just like we have automated daily chores, most of the information-gathering functions for a human will be automatically uploaded in the brain. They choose their area of interest as a person and the feed will automatically upload the information to a hard drive installed in the brain through a telegraphic transfer. This is not equivalent to becoming a robot as we will still have our consciousness and will be triggered by satiating our emotions. Imagine information on various platforms being created by artificial intelligence-driven bots. It will have some human intervention or oversight of course. Now the question is – what is the role a communicator plays in such an environment?

If the news is being created by bots, how do you do pitch stories? Communicators will also be pitching through communication specialist AI bots and therefore one’s role as a communicator will actually metamorphose into procuring such AI bots and customizing them to suit one's organization. All of this needs your imagination to take a quantum leap, says Nitin, and not think in terms of incremental advancements. One aspect to understand here is that we will actually have to become digital natives in the true sense, really conversant with the capabilities of various derivatives of artificial intelligence.

As communicators, our job would be to create AI-based solutions. It’s about knowing the solutions that are entering or available in the market, knowing the makers of the solution, and possibly customizing them according to your organization’s needs. It would also entail brainstorming and exploring various possibilities of AI in the realm of communication. Unlike the traditional media practices seen today, these digital and technology-driven tools will have built-in predictive capabilities to optimize – which story format, which content, which medium will work best in each case. As communicators, this opens up possibilities of shifting to micro-targeting, geo-targeting, time targeting of communication. But you may say, some of this is already happening today.

The next level of hyper-targeting communication would be geno-targeting. Let’s call it Genomedia. The evolution is going to be genome media that will map a person’s preference as a consumer, their tendencies, likes, dislikes, more accurately, and therefore, the communications will become targeted as per their genome sequencing. This can have benefits not just in communication, but in other areas like finance, insurance, recruitment.

Nitin believes that communicators will have a greater role to play in this new world. Why? Because we are the best suited to reinvent the art of storytelling. The biggest pivot would be that the storytelling and relationship building that we’ve been doing forever, will change. The technologies will become even more sophisticated. Human or humanoids will actually continue consuming more stories, more content, whether it’s augmented reality content or video content. The only way to keep it engaging and the only set of people who know how to do it are the communicators. So one thing that is not going to change for a communicator or an advertiser is to connect at a deeper level through better storytelling.

Extensive use of technology and AI, robotic process automation, and advanced analytics are already creating ripples across value chains. Roles such as consumer insight analyst, Social Engagement Manager, or data evangelist are the kinds of roles that in communications will become commonplace. Social media listener, retention analysis analyst, VI designer, will become these are all an integral parts of communications teams. The lead of business and consumer insight, a data architect, cloud software engineer, a machine learning engineer; a combination of these will actually form a communication function in a large corporate or even on the agency side.

Therefore, the question is, how much of this started happening now? And what do you do as a communicator to prepare for the far future? There’s no clear formula. Start learning new technology, set aside a certain time and budget to experiment using new technologies. Do multiple pilots using new techniques in your company.

If you want to prepare yourself for 10-20 years ahead, there is no specific course that you will find that has the relevant course material. There is no template. Sometimes all it takes for someone to remind you is that while you’re living in the present, the future is coming. 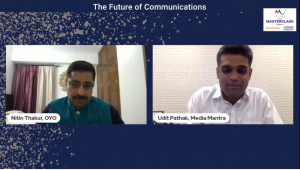 The masterclass by Nitin was followed by a Q & A session with Udit Pathak, Co-founder & Director, Media Mantra.

On being asked by Udit, how he sees communication helping founders take Indian companies to the global level, Nitin said that it is very relevant for him, given that he is working on a large new-age company, which has already gone global and is also trying to open up in new countries.

Highlighting two components, he says one is cross-border reputation building. We have to bring ourselves back from 20 years forward that we went to during our earlier discussion.

Harnessing executive social media presence smartly can be one of the most potent low-cost tools for entry into new markets. He shares the example of OYO founder Ritesh Aggarwal, whose social media presence has ramped up on Twitter. He already has more than 1.5 lakh followers and that’s just a start. Such a reach can cut across countries.

The second, a tactical way, is to start looking at new geographies with the help of communication and evaluate the way of targeted publications. Tier one publications are typically categorized basis readership or the circulation base and the source credibility of these publications. When you do a news search in a particular country on Google, about your company – which are the publications and the news items that are on a top-up in that country in search results. .  On doing this exercise, he was very surprised occasionally, that of what was considered as tier one, about only half of them actually come up on the first page of the search in that particular country and throws up other news outlets that can be mapped and targeted easily from the home base itself.

On being asked how he thinks businesses and PR firms have adopted in the post-pandemic world; Nitin starts with the PR firms. He says he saw a hockey stick pattern. The pandemic impacted a lot of clients adversely. Many of them either let go of agency retainers completely while some reduced retainers for a quarter for the PR agency, for four to six months. Some asked for a free three- or four-month period of continuation of basic assistance without paying a fee. This was a massive hit on the PR firms.  A lot of them coped by shrinking costs and some of them giving up expensive office spaces. A lot of other discretionary spending was stopped. But most of them survived well. When he spoke to founders from PR firms, he was surprised to hear that a completely new set of clients came in eventually, prioritizing communications because for them it was the best time in the last decade as far as business is concerned.

Commenting on measurement, on being asked by Udit, if  PR professionals and as leaders today in the industry are doing enough to solve the PR measurement Nitin said this is an area that he believes where the industry has tried a lot but hasn’t been able to achieve a breakthrough. For a lot of large corporates,  marketing and communications are one of the most expensive but one of the most valuable investments. Hence, they have a lot of expectations from communications and advertising teams. But at the same time, there’s also a huge disillusionment. The CEO measures success by rising in revenues, profits, or valuation, while the CMO and CCO talk awareness, engagement, the share of voice, and top-of-the-mind recall. This dissonance has led to finance and procurement having a larger say in how much marketing and communications can spend and which mediums to spend it on.

Does Your Business require a PR strategy overhaul during Covid19?